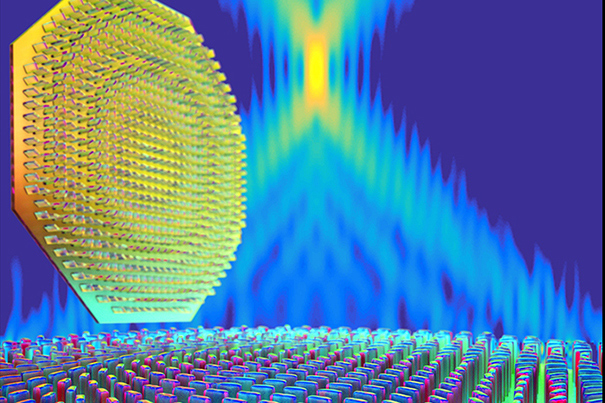 Curved lenses like those in cameras or telescopes are stacked to reduce distortions and clarify images. That’s why high-powered microscopes are so big and telephoto lenses so long. While lens technology has improved, it is still difficult to make a compact and thin lens.

But researchers from the Harvard John A. Paulson School of Engineering and Applied Sciences (SEAS) have demonstrated the first flat — or planar — lens that works highly efficiently within the visible spectrum of light, covering the whole range of colors from red to blue.

The lens can resolve nanoscale features separated by distances smaller than the wavelength of light. It uses an ultrathin array of tiny waveguides, known as a metasurface, which bends light as it passes through. The research is described in the journal Science.

Light passing through the meta-lens is focused by millions of nanostructures. Courtesy of the Capasso Lab

“This technology is potentially revolutionary because it works in the visible spectrum, which means it has the capacity to replace lenses in all kinds of devices, from microscopes to cameras to displays and cell phones,” said Federico Capasso, Robert L. Wallace Professor of Applied Physics and Vinton Hayes Senior Research Fellow in Electrical Engineering, the senior author of the paper. “In the near future, meta-lenses will be manufactured on a large scale at a small fraction of the cost of conventional lenses, using the foundries that mass-produce microprocessors and memory chips.”

“Correcting for chromatic spread over the visible spectrum in an efficient way, with a single flat optical element, was until now out of reach,” said Bernard Kress, partner optical architect at Microsoft, who was not part of the research. “The Capasso Group’s meta-lens developments enable the integration of broadband imaging systems in a very compact form, allowing for next generations of optical sub-systems addressing effectively stringent weight, size, power, and cost issues, such as the ones required for high performance AR/VR [augmented reality/virtual reality] wearable displays.”

In order to focus red, blue, and green light — light in the visible spectrum — the team needed a material that wouldn’t absorb or scatter light, said Rob Devlin, a graduate student in the Capasso Lab and co-author of the paper.

The Capasso Group has developed a flat lens that works in visible light and can focus light as small as nature allows.

The team used titanium dioxide, a material found in everything from paint to sunscreen, to create the nanoscale array of smooth and high-aspect ratio nanostructures that form the heart of the meta-lens.

“We wanted to design a single planar lens with a high numerical aperture, meaning it can focus light into a spot smaller than the wavelength,” said Mohammadreza Khorasaninejad, a postdoctoral fellow in the Capasso Lab and first author of the paper. “The more tightly you can focus light, the smaller your focal spot can be, which potentially enhances the resolution of the image.”

The team designed the array to resolve a structure smaller than a wavelength of light, around 400 nanometers across. At these scales, the meta-lens could provide better focus than a state-of-the art commercial lens.

A hologram of an eye, about half a centimeter in diameter, is imaged by the meta-lens. Depending on the distance between the hologram and the meta-lens, the eye appears and disappears. Courtesy of the Capasso Lab

“Normal lenses have to be precisely polished by hand,” said co-author Wei Ting Chen, a postdoctoral fellow in the Capasso Lab. “Any kind of deviation in the curvature, any error during assembling makes the performance of the lens go way down. Our lens can be produced in a single step — one layer of lithography and you have a high-performance lens, with everything where you need it to be.”

“The amazing field of meta-materials brought up lots of new ideas, but few real-life applications have come so far,” said Vladimir M. Shalaev, professor of electrical and computer engineering at Purdue University, who was not involved in the research. “The Capasso Group with their technology-driven approach is making a difference in that regard. This new breakthrough solves one of the most basic and important challenges, making a visible-range meta-lens that satisfies the demands for high numerical aperture and high efficiency simultaneously, which is normally hard to achieve.”

One of the most exciting potential applications, said Khorasaninejad, is in wearable optics such as virtual reality and augmented reality.

“Any good imaging system right now is heavy because the thick lenses have to be stacked on top of each other. No one wants to wear a heavy helmet for a couple of hours,” he said. “This technique reduces weight and volume and shrinks lenses thinner than a sheet of paper. Imagine the possibilities for wearable optics, flexible contact lenses, or telescopes in space.”

The authors have filed patents and are actively pursuing commercial opportunities.

Congratulations to Adam on his Teaching Award